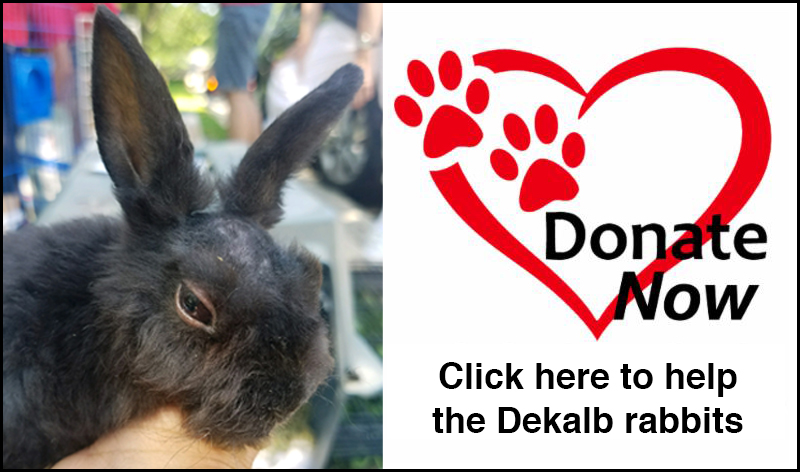 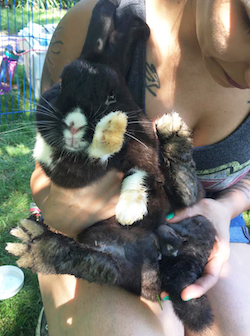 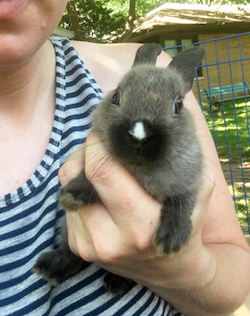 On the hottest day of the year, Red Door was alerted to a breeding/hoarding situation in Dekalb, west of Chicago. People were housing adult rabbits and multiple litters on their porch. Older litters would then be turned outside to fend for themselves. Even the rabbits on the porch were being fed pigeon food instead of an appropriate diet for rabbits.

Red Door coordinated a rescue team of over 20 volunteers from multiple shelters and rescues, including Wonder Bunny, Angel Paws, BUN, HRS and Tails Humane Society. They came with carriers and iced bottles for the rabbits to snuggle up to in order to cool down—the heat index was over 100 degrees. Everyone showed an incredible amount of patience and dedication towards helping a terrible situation for helpless animals.

Working with the town’s mayor and the police force, rescue volunteers were allowed to take the rabbits from the porch – 4 adults and 15 babies. Volunteers then captured 10 additional rabbits running through the neighborhood. A triage area was set up outside in a neighbor’s yard to access all rabbits’ medical conditions. Almost all were dehydrated and underweight. Some had bite wounds, ears crusted over with ear mites, fur missing from fur mites, and eye infections. SQ fluids and flea/tick treatments were given in the triage staging area.

The most critically sick or injured rabbits were sent immediately to Chicago Exotics Animal Hospital, who made time during their busy Saturday to examine and treat four adults and 15 babies. All of them have coccidia; several have GI stasis. One has a scratched corneal ulcer. Two had ears horribly infected and crusted with ear mites and parasites. (You can donate to the Red Door’s medical bill at Chicago Exotics for the Dekalb 32 Rescued Rabbits by calling 847-329-8709.)

Neighbors reported to us that one bunny who was outside was killed by a cat. One baby rabbit died overnight after being rescued. And on Sunday, July 1, several more rabbits were captured, bringing the total to 32 rescued rabbits.

Funds are desperately needed to help these rabbits. They haven’t had the best start in life, but they are being cared for and loved now. They will need medical rechecks, two rounds of fecal testing, spays and neuters, medicine and food. Red Door is overseeing the emergency funds being raised; other rabbit shelters who are taking in some of the Dekalb rescued rabbits will receive appropriate funding from money raised for every rabbit they take in.

It took a tremendous effort of cooperation and coordination to rescue these 32 rabbits. Can you help us with their care? Please consider making a donation now. 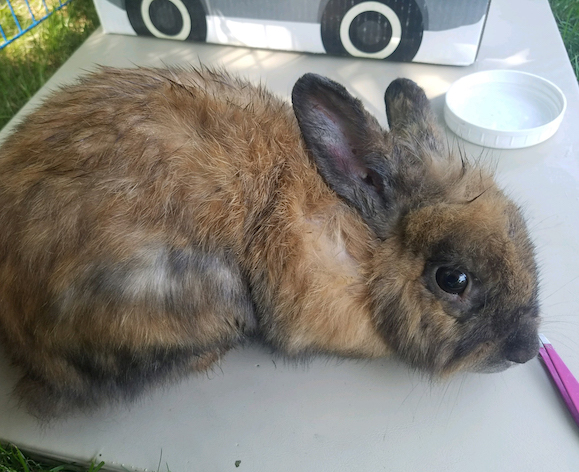